This is the name of part of the road from Mazatlán to Durango, and what an amazing route this has turned out to be. We climbed from sea level to 2700m over three days with the biggest climbing day being on day two where we climbed over 2500m. There was a huge difference in temperature – the temperature in Mazatlán being just over 30 degrees during the day to a much more pleasant riding temperature of low 20’s higher up. The only drawback was the nights were much colder, and we even had a frost at our camp on night three.

Night one we stayed in a motel at a town called Concordia and were entertained by dancing and some singing in the local plaza. The town was celebrating ‘Fiesta Del San Sebastián’ and most of the town was there watching the entertainment.

The next day was the big slog up the hill. Luckily the gradient was not too steep and the road was in good condition. The road is officially called the Mex 40, but this route has been replaced by the Mex 40D which cost 2.2 Billion to build and has 115 bridges and 61 tunnels! The biggest bonus was there was hardly any traffic so it felt like we were riding on a dedicated cycle route for us. This has meant some of the small towns and villages have suffered due to lack of traffic and have gone into decline. However at one small village in an unlikely location we did find a Chinese gym. As if climbing 2500m was not enough for me, I had to have a go on the gym.

The actual start of El Espinazo Del Diablo which stretches for about 10km. 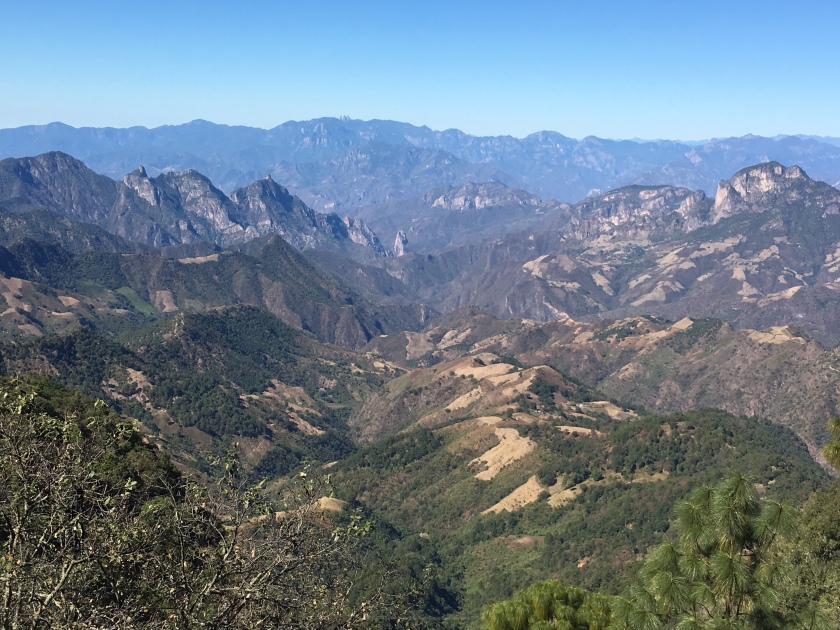 On day three we had reached 2500m and the land flattened out. We got to a place called El Ciudad which is located next to a National Park where there are stunning rocks and a waterfall that is quite a local tourist attraction. The town itself was a bit of a dive, but the surrounding countryside was stunning. 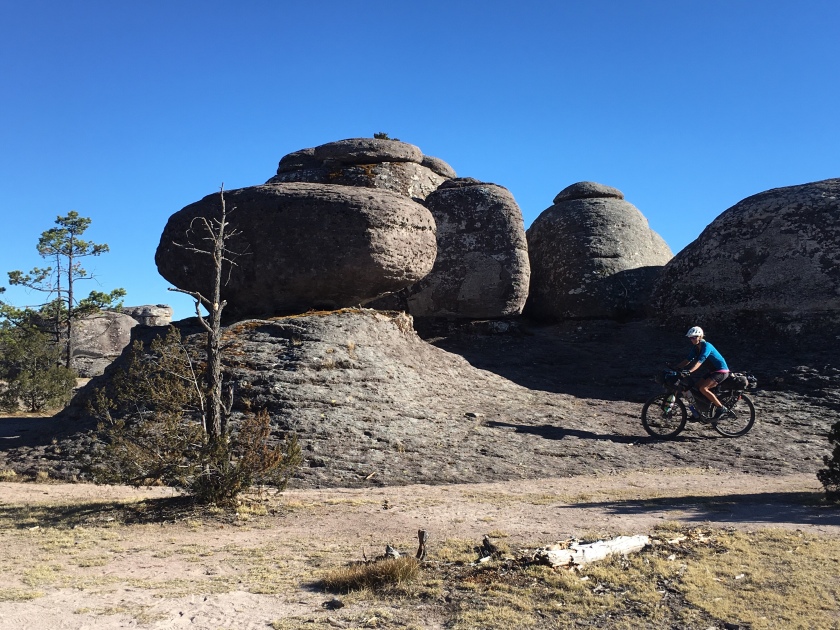 Our nicest, but coldest campsite on the route.

After La Ciudad we got off the pavement onto a dirt road that was a rail line at one stage. We were able to ride this road for about 50km all the way to El Salto which is a timber town. On the way we came across a couple of forestry crews. We noticed safety gear was not a priority, and the workers were cutting the logs into one metre lengths and then manually lifting them onto a truck. Along the route were a couple of old tunnels which were pretty cool. 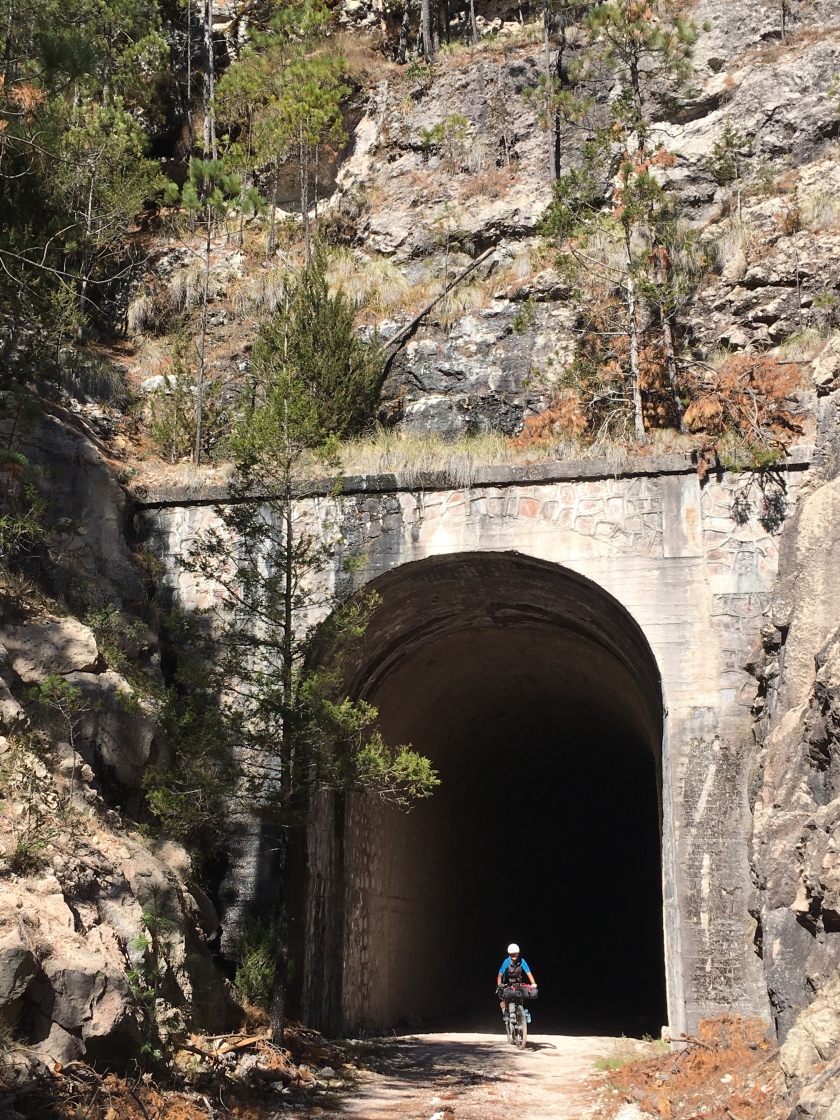 By this time Tony’s bike had developed a loud squeak when he turned his pedals. There was no sneaking up on anyone with that noise. That meant a new bottom bracket when we reached Durango. After we got back to the Mex 40 it became much busier, and with no shoulder for us to ride on we thought we would look for an alternative way to get to Durango. One of our mapping apps on our phones suggested a route that took us on a ‘cycle trail’. We gladly got off the the Mex 40 and headed down this rocky road that soon turned into an unrideable track. It took us about 90 minutes to negotiate, but the scenery on it made it well worth it.

This was a short day so we had plenty of time to explore Durango which turned out to be a really neat city to walk around. Apparently it’s a bit famous for making movies and even had a walk of fame. 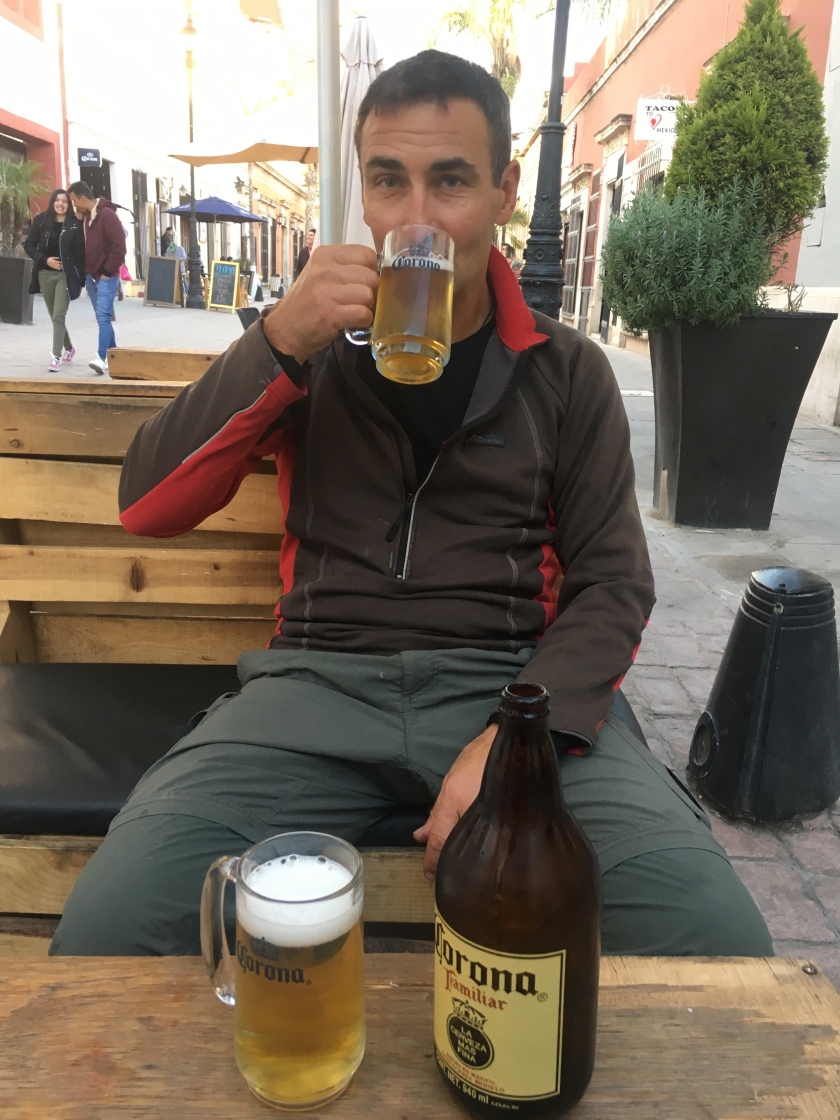 One thought on “El Espinazo del Diablo – The Backbone of the Devil.”