This famous quote was uttered by Sir Edmond Hillary after he and Tenzing Norgay reached the top of Mt Everest. This is a little how I felt about completing the Baja Divide. Our achievement was not quite on the same scale as Sir Ed’s but we both shared a fair bit of satisfaction about finishing that we have not gained from riding any other route.

Why is this I wonder? Was it the steep climbs, rough corrugated (or as our American friends refer to as ‘washboard’) roads, the deep sand or ‘baby head’ sized rocky sections? Was it the flat road riding through ‘peanut butter’ type mud that took us hours to nurse our clogged up wheels through? Was it the supposedly easy flat riding that turned out to be much harder effort wise than the steep hill climbs because of deep sand / baby head rocks / mud or a combination of all three? I’m sure I’m painting a great picture here – and yes, this is what we do for fun. We commented to each other more than once along the route “This is still better than being at work” as we pushed our bikes over the rough ground. 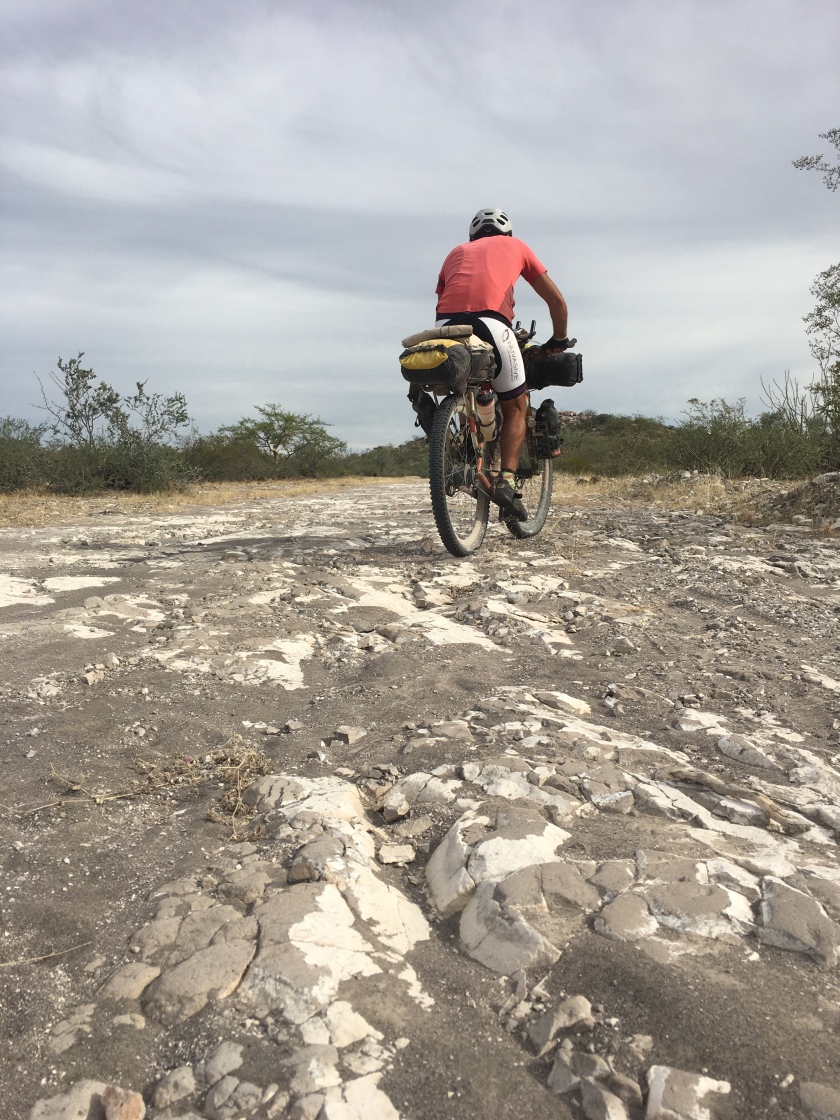 So the final 9 days of the Baja Divide route started In Ciudad Constitución. The ‘highlight’ of leaving the city was riding through the city dump where much of the rubbish is burned. We were riding through thick rancid smoke for about 1km. What shocked us is there appeared to be people living in makeshift shacks at the dump – scavenging a living from other people’s rubbish.

Along this route we kept bumping into Jamie who is a fellow biker who hales from New York. He was travelling pretty light and had no cooker and was living on tortillas filled with tuna, avocado and peanut butter (no true American would leave home without peanut butter). We camped together the first night after leaving Ciudad Constitución and we talked him into sharing a hot dinner of our version of Mexican Mac ‘n cheese (it wasn’t too hard to talk him into that). We found a wonderful camp next to the river and we’re able to jump in and wash the sweat and dirt from the day off. Jamie commented that this was the best camp he’d stayed at. 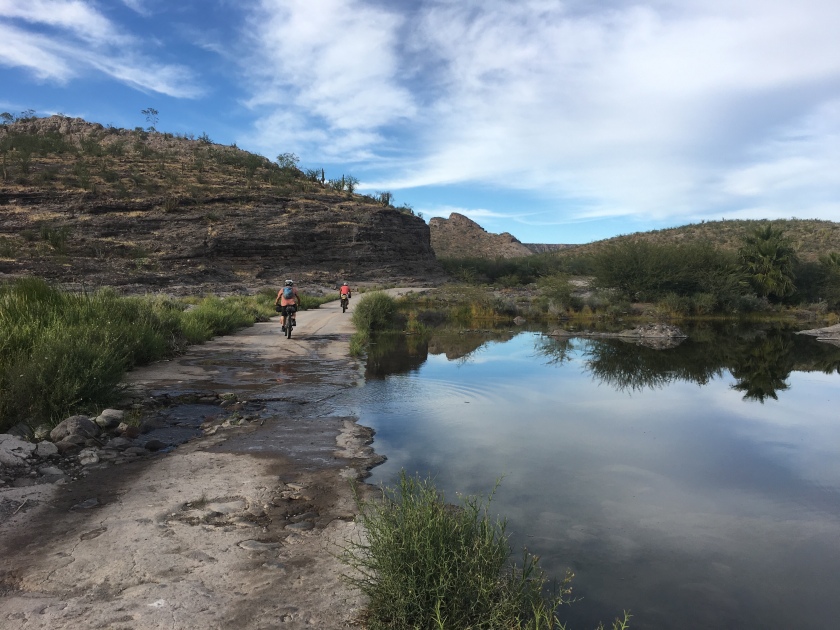 The next day Jamie was on the road before we got out of the tent. The road was really rough with steep pinchy climbs. Both of us were hanging out for a cold coke, but none of the villages we passed through had any kind of shop. We caught up to Jamie and he was sitting in one of these villages outside of a school using the internet! We couldn’t believe there was wifi available when we couldn’t even purchase a coke. We asked what he was doing and he said he was feeling sick and was trying to decide whether to carry on riding to La Paz to see doctor or to try to get a ride. He was looking for some medical advice so I pulled out my phone and through the wonders of modern technology (and WhatsApp) was able to phone our friend ‘nurse Sandy’ in New Zealand so Jamie could ask her for some advice. It was decided he would carry on riding with us and seek further medical advice in La Paz. The next night we fed him again (we had taken way too much food with us) and he was really grateful for this. In return when we arrived in La Paz he brought us a big juicy steak each – not a bad deal we thought. 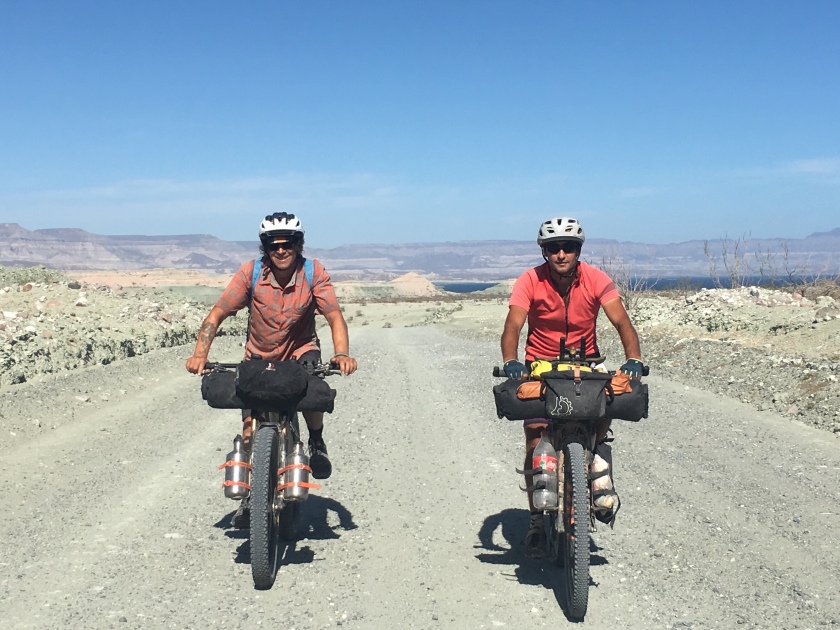 Back riding on the coast by the Sea of Cortez – Jamie and Tony.

The road over the mountains was really rocky and rough, but when we hit the coast rocky and rough was replaced by sandy and corrugated (even worse)! We had another 60km of this bone jarring road before we reached the sealed road. It was going to be a long 115kms to La Paz I thought. We climbed over a nasty steep 200m climb and descended back to the coast when there at the bottom of a small hill was a grader working the road! Yay we are saved! The grader driver had done a fantastic job and the gravel road to the seal was a piece of cake to ride. The added bonus was the strong tail wind we had all the way along the coast to La Paz – life was good!

After a day off on La Paz we started out on a loop in the southern tip of the peninsula with some of the best road surfaces we had ridden yet. For me, I enjoyed this loop the best. Sure there was still some challenging riding, but the scenery changed quite a bit. We ended up riding along the coast on the Sea of Cortez again with beautiful clear water. Our first camp out of La Paz was in a small bay that some local mountain bikers we met on the road recommended to us. It was perfect and we had the whole place to ourselves. The water was so clear we could see fish swimming around the rocks. Tony really wished he had his spear gun and snorkel gear with him.

We continued south along the coast passed lots of holiday homes that are clearly owned by Canadian and North American ‘Snowbirds’ who are escaping the ravages of winter in their home towns. There were Gringos everywhere riding their four wheelers or beach buggy’s. There was heaps of property for sale along the coast line and I got the feeling locals were selling their prime real estate to foreign buyers (aka selling their heritage). We then headed back into the hills for more steep climbing…

Here the scenery started to change. Everything was more lush. The cactus’ were competing with trees and bushes for desert real estate. The roads had signs of water damage and there was water in the creek beds. It was also a lot warmer and we used a couple of the creeks to wet our shirts to try to stay cool. 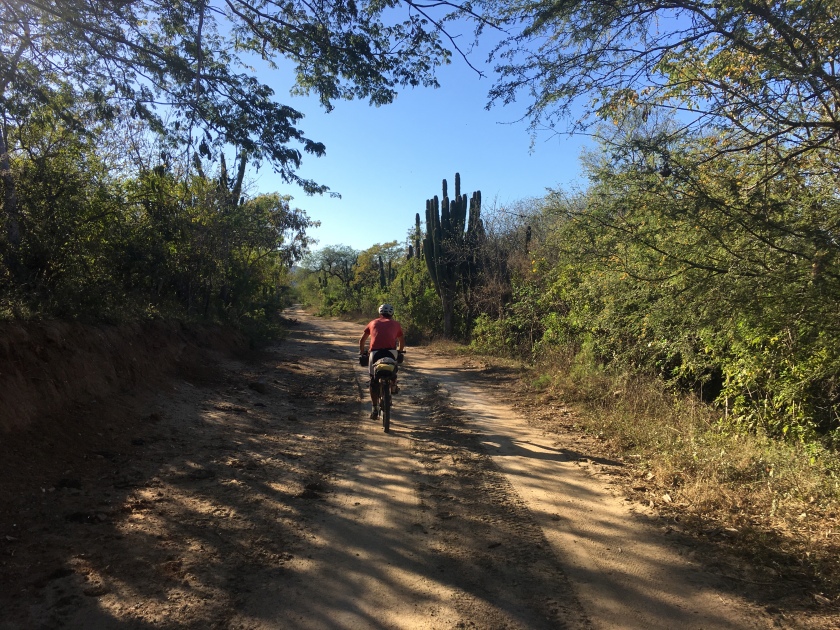 Cactus growing amongst the trees.

Donkeys waiting to be loaded up with firewood.

We finished our loop after 6 days in La Ventana. The last night on the road we arranged to meet up with Jamie again for one last group meal of our special Mexican Mac ‘n cheese and some dessert of Oreo yoghurt – yum!

So having said all that, would I recommend this route to other people – yes absolutely, but with the proviso they don’t go into it thinking it will be a walk in the park.

Here’s where we’ve been.