Both of us never thought we’d be spending Xmas surrounded by Cactus and desert, but here we are in Baja Mexico this year. Actually we are really enjoying being away from the Xmas hype and commercialism that surrounds the festive season at home and in the States. We did try to get into the festive season a couple of weeks ago when we found some tinsel in some rubbish on the road side. I wrapped some around my handle bars and Tony wrapped some in the spokes of his front wheel. That didn’t last long after it rained and our tinsel was covered in mud. We are expecting to be in a place called Mulege (pronounced Mulahae) on Xmas day drinking beer and having a swim in the Sea of Cortez.

Since leaving Catavina we have had some pretty varied roads to ride including some of the toughest sections so far. Catavina is where we stocked up with enough water to last two full riding days and one night approx 19 litres. We purchased 3 x 4 litre bottles and strapped them to our front forks of the bikes and filled every other bottle we had on the bikes up. After 2km on the rough road the first 4 litre bottle failed and we had water running out of the bottom of it. We decanted what we could and drank the rest. The other two bottles failed about 20km later. We decanted and drank what we could, then looked for suitable replacement bottles that had been discarded on the side of the road to fill up. Here we were again scavenging from rubbish on the side of the road (a pattern is forming here). We scored three replacement bottles that were still carrying now.

We had some really nice wild camping on the Pacific Coast, in quiet bays all to ourselves. Some of the nicest camping so far. One even had a long drop toilet for our convience.

By this time we started to run into other cyclists and it was nice to share stories and experiences with them. About 100 cyclists do this route each year.

We have also ran into Tim from Tennessee who is a cyclist, but was down here in Baja having a car camping and kayaking holiday. He met us as we were grinding our way up a steep hill at 10am when the temperature was reaching about 30 degrees. He pulled up beside me in his Jeep and asked if I would like a cold beer. “Hell yes” was my reply. At the top of the hill he pulled up next to Tony (who was ahead of me) and got out of his car with his beer already open and handed Tony a cold one. It was one of the best beers we’ve had so far. We have learned to never turn down beer when offered to us on the road. After that we still managed to bike another 70km.

After leaving Baja De Los Angeles where we had a day off, the riding has been challenging, pounding our backsides on washboard roads, deep sand and rocky trails. On some of the sandy sections we have been able to avoid the deep sand by riding to the side of the road weaving our way around cactus’ and other spiky plants. However yesterday when riding the last flat ‘easy’ 52km into San Ignacio it took us 8 hours to negotiate deep sand…

Then there were areas where there was deep sand punctuated by rocks! This is the most pushing we have done on this trip. We have decided that ‘flat’ roads in the Baja mean slow, butt punishing hard work!! We have decided we much prefer the hills. Having said this, on this part of the trail we were rewarded with our first real fresh surface water which was really nice. 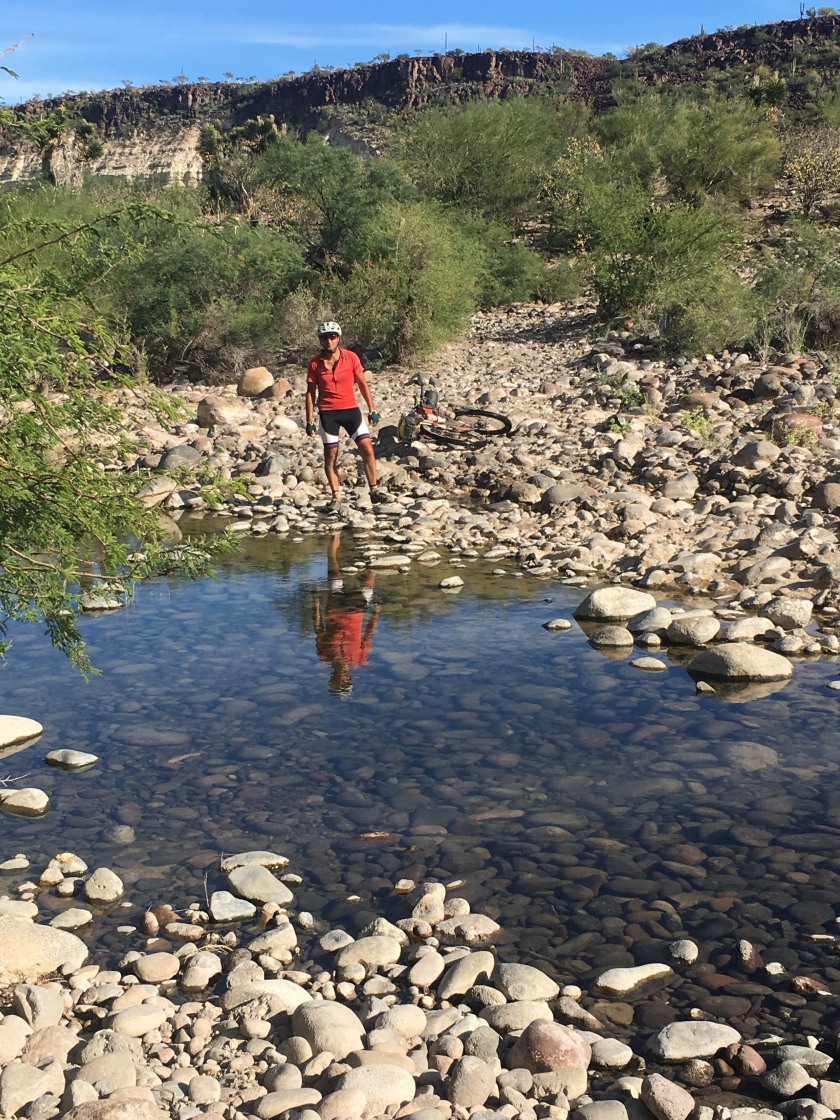 Other hazards in the desert apart from sun burn and lack of water is cactus thorns. They are everywhere and if you’re not careful they will stick into anything including our shoes, the tent, clothes and our tyres. Our purchase of our luxury items (ie our chairs) have kept our butts off the spiky ground.

And the ‘Stans’ (the goo that we put inside our tyres for all you non cyclists) is keeping our tyres inflated.

The scenery is still proving to be beautiful and we are amazed by the different colours and variety of landscapes in the desert. The riding has been challenging, but the rewards have beeen worth it. 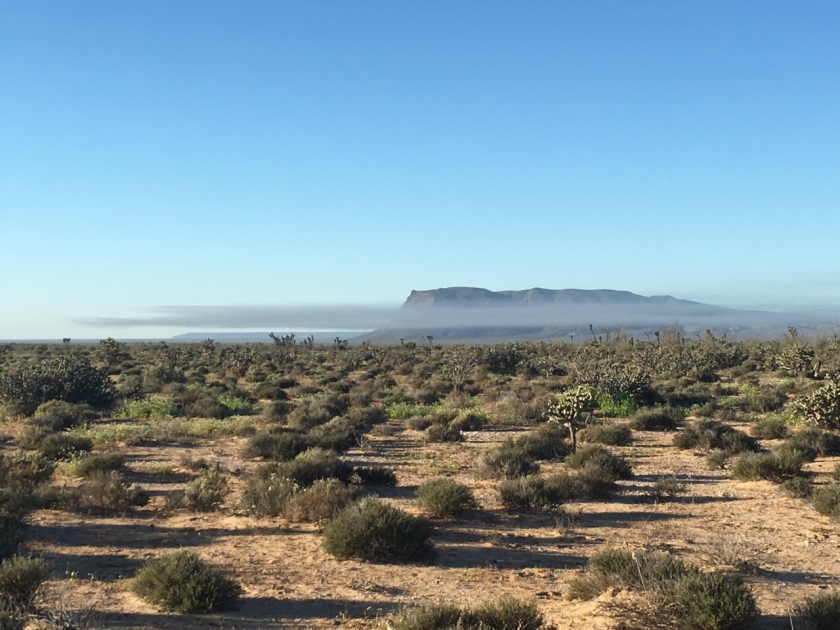 Where we have travelled this week.

We travelled from Catavina in the north to San Ignacio which is where the blue dot is on the map. By Xmas day we hope to be either in Mulegé in the south east or close to it. We hope you all have a great Xmas day. 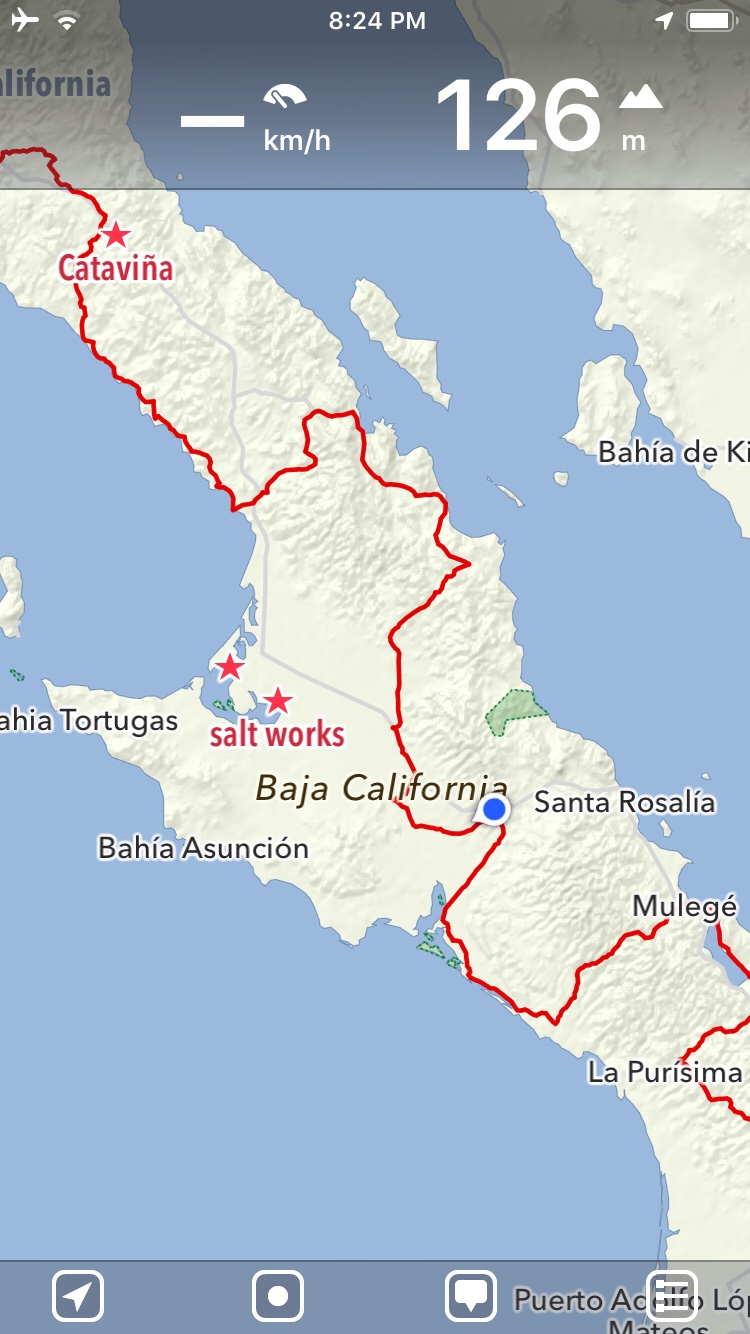