We left San Diego escorted out of town by our Warm Showers host (extraordinaire) Diane who was riding her mtb. We were loaded up with enough food for three days and enough water for an over night (around 19 litres between us). We had strapped two three litre bottles of water to our front forks making the bikes very heavy and the steering very shaky. Diane and I swapped bikes along one of the cycleways and it took her a while to get used to the heavy steering causing the bike to wobble after riding her light and fast Stumpjumper mtb (I didn’t want to give it back). She left us about 27km from her house, and we travelled another 8km before we got out of town.

After we got out of town we negotiated a brutal 800m climb which let our legs know what they were in for over the next month or so. We spent our last night in the USA at a wild camp 25km before the Mexican boarder. The next day we crossed the boarder into the town of Tecate, Mexico. Our first impression was of how people here use any opportunity to make a buck with the Immigration Officer trying to sell us home made honey and salsa. Tecate is a bustling town and we experienced our first restaurant meal. Our grasp of the Spanish language is about nil and ordering food became a challenge for us and the wait staff. We got there in the end with delicious Tacos, Quesdillas and a beef soup. Then it was time to get out of town and hit the dirt roads.

The last four weeks of cycling the Pacific Coast Highway made us a little soft and our waistlines a little thicker. Here in Mexico once you leave the main road we found we were riding rough dirt roads with steep climbs, ruts and little traffic. It was bliss after riding the busy roads in North America. We also noticed the sides of the roads near towns were strewn with rubbish – almost like an informal landfill. 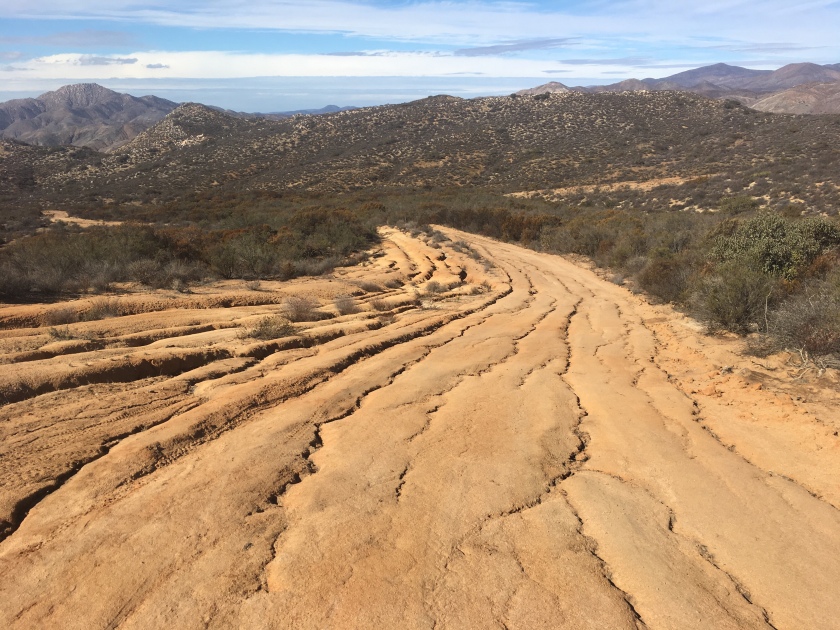 When travelling through towns and villages we had to run the gauntlet of barking dogs. We even had two dogs follow us for a couple of kms up the road like a pair of escorts. 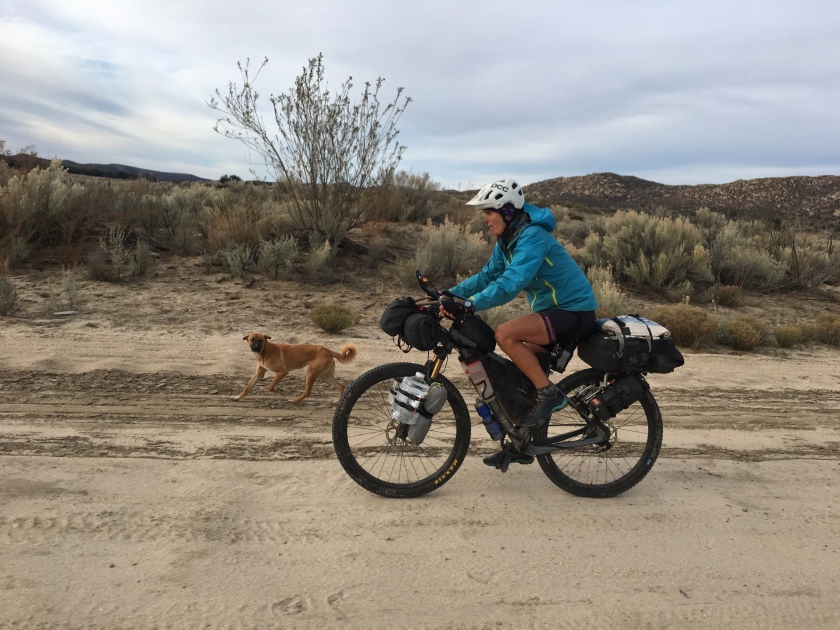 There are even Roosters at the service stations… 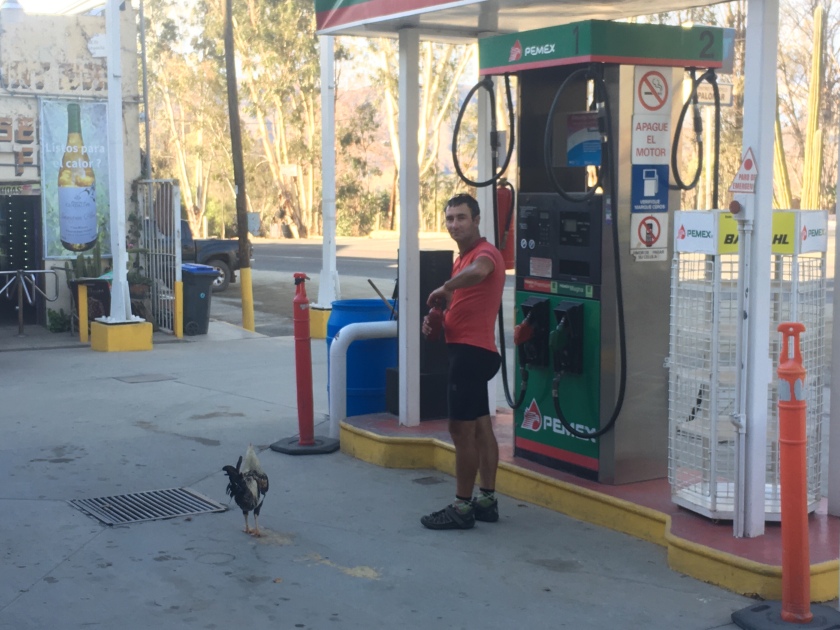 We camped at a campground in a town called Ojos Negros (black eyes). It cost us MP 120 (USD 5.80) and we had a picnic table, a grassy site to pitch the tent, water and a cold water shower – luxury! However it was noisy with barking dogs all night and when they stopped at 5am the roosters took over. This made camping out of the towns more attractive because of the peace and quiet. Also our new luxury items (our deck chairs) make wild camping so much more pleasurable.

Last night it rained. It rained all night and most of the next day. This turned the roads into the consistency of thick porridge and made the riding exceptionally hard. We struggled on through heavy driving rain and a strong head wind down to and along the Pacific coast. We arrived at a small town on the coast and had lunch, then decided both of us had had enough of the weather and didn’t have another 40km in us battling the elements. We succumbed to our first hotel costing us an extravagant USD40, but at least it had a hot shower! 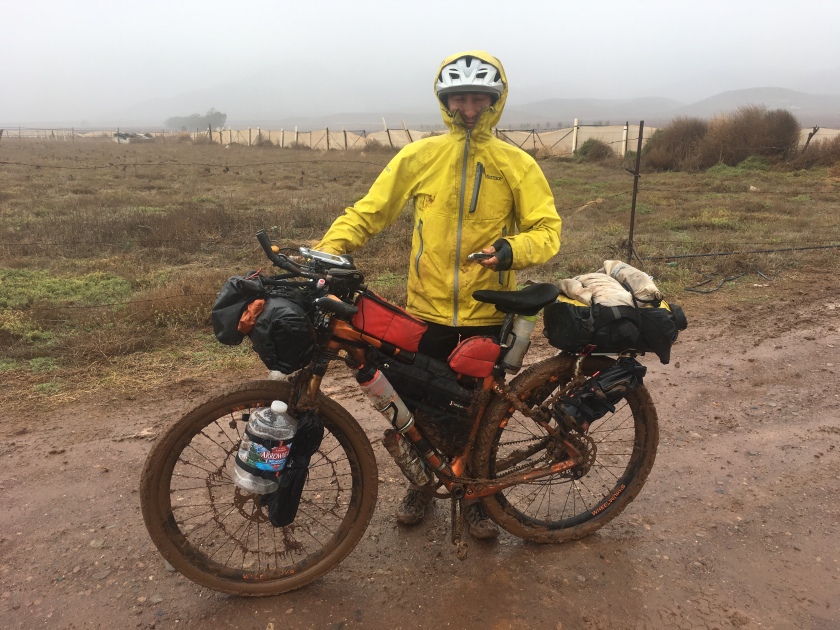 Turns out it wouldn’t have made any difference. This morning the sun was out so we got gear dry then rolled out of town. First up was a river that would have been uncrossable in the rain.

With only 40km to get to the next town of Colonet we had grand plans of resupplying then heading into the hills. The mud had other ideas. The bikes were going nowhere fast. 5 1/2 hours later we finally get to Colonet covered in mud, get supplies and a much needed beer then find somewhere to stay. We managed to find a nice hotel to spend the nigh and to get clean (mostly by hose pipe followed by a hot shower)👍 Did we mention the beers tasted really nice?? 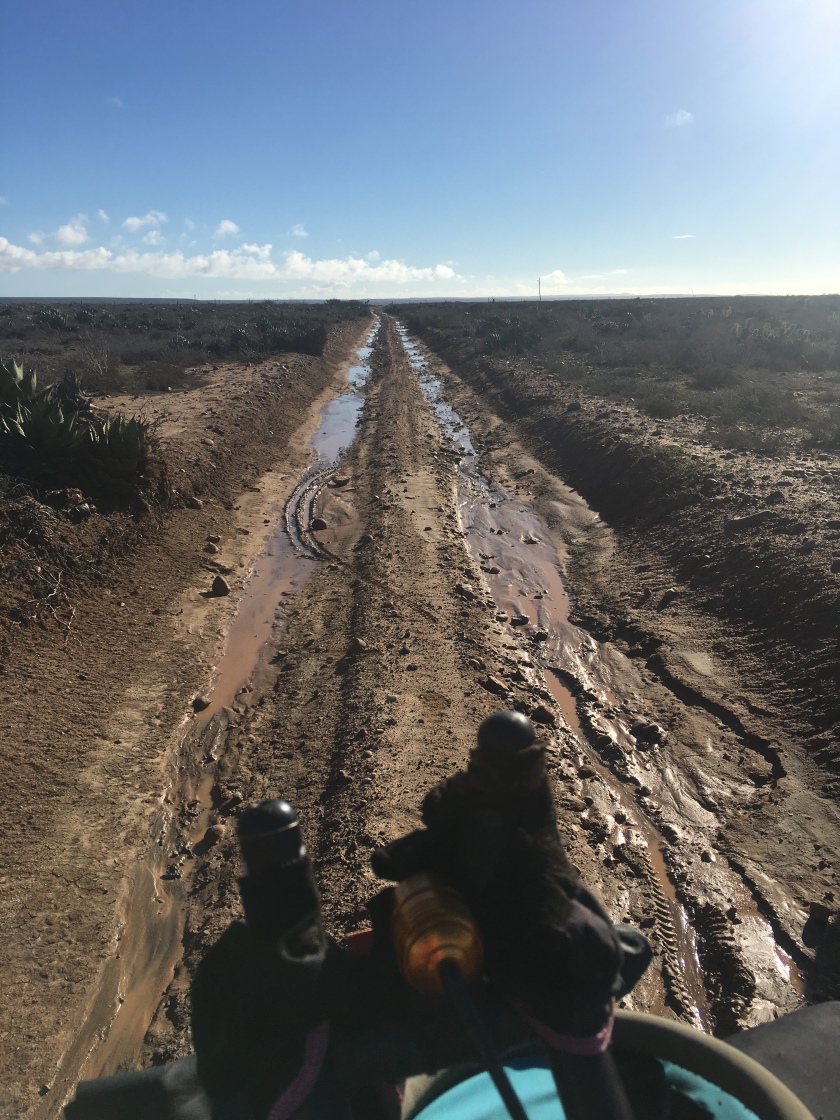 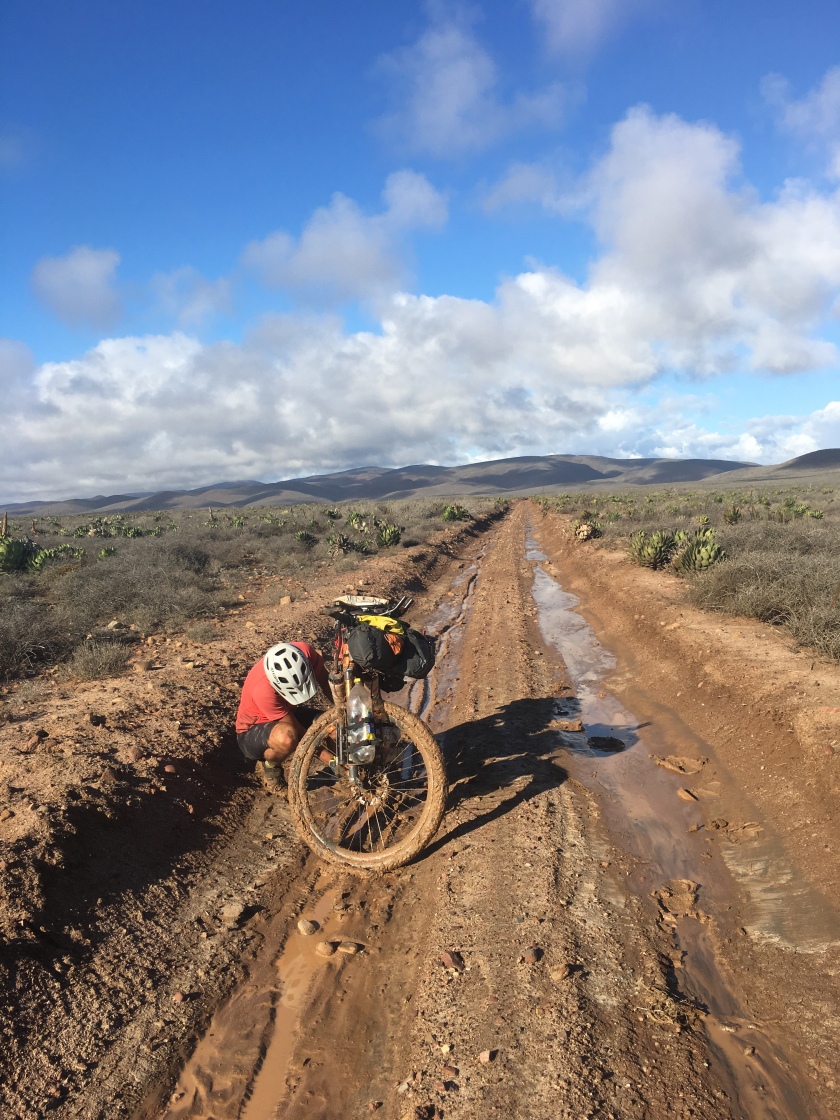